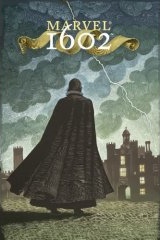 I have to admit, I'm not very familiar with Marvel's heroes. I know Spiderman from the movies and the cartoons. I only know X-men from the movies. And I had heard of Nick Fury (and Michael Knight... er... David Hasselhoff's TV movie), but knew nothing about him. When I first started reading, I was bored and couldn't get into the story because I didn't associate with the characters I had seen so far: Fury and Dr. Strange.

Since I had borrowed the books, I didn't want to hold onto them too long and I at least wanted to read through it. So, I gave it a second shot. Almost immediately after getting past my previous attempt, I was hooked (dang, had I read one more page). I was hooked.

Set in 1602, the world seems to be falling apart at the seams. There are constant, unnatural storms, red skies and earthquakes. Many feel the world is ending and it turns out to be the case.

Dr. Strange pinpoints the source of the world's problems to the New World (Roanoke, VA) where a shape shifter (Virginia Dare) and her Guardian (Rojhaz) are from. The "end of the world" seemed to start 15 years ago (coincidentally the shape shifter's age).

The Knights Templar are also moving their secret treasure, which is believed to be a weapon, to England (from the Vatican). Count Otto von Doom of Latveria is scheming to steal it and Fury is tasked with seeing its safe transport. Fury calls on blind agent, Matthew Murdoch, to meet with the Knight with the treasure and escort him.

The Grand Inquisitor has been leading the Spanish Inquisition, killing the witchbreed (mutants).

These three plotlines all converge with the heroes having to work together to save the world.

I really enjoyed the whole story. After getting to know the characters, I started to breeze through the books, reading 6 in one night and the last two the next night. Wikipedia has a nice writeup about the series and mentions a sequel, which I plan to check out. This series also sparked my interest in Marvel characters, so I'll be checking out more of them.

Image taken from Amazon.
Posted by Unknown at 11:12 AM