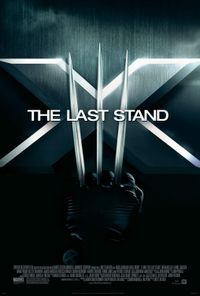 We went to see X-Men: The Last Stand over the weekend. Neither one of us had heard too many good things about the movie and weren't all that excited about going. Well, we were definitely more excited for Superman Returns. (Image from Wikipedia)

I have to admit, we were both pleasantly surprised. Both of us liked the previous X-Men movies with the second one being the better of the two. Normally we only make it out to the theaters only once or twice in a year. Not twice in seven days. We hadn't even planned on seeing a movie but we were out to dinner near a theater, wanted to see X3 on the big screen if we could and didn't have other plans, so we went to see it.

Some (probably obvious) spoilers below...


The action sequences in X3 lived up to its predecessors. Lots of really good special effects and cool ways to show off the mutants' powers. About effects, there's a flashback seen with Ian McKellen and Patrick Stewart in which they were digitally "un-aged". Hugh Jackman and Halle Berry have large roles in the movie and the girl that can walk through walls is pretty cool. I loved the fight scene between Iceman and Fire boy (Pyro). :)

You have to know that Jean Grey didn't die in X2. She's been in the promos for X3. Well, I personally didn't think she or her character added to the 3rd movie. As much as I loved her in the first two, I thought they could have let her rest in peace. I never was really into X-Men before the movies, so I can't tell you if her storyline is true to the comic books.

The ending was pretty predictable, including the part after the credits.

If you like seeing big effects and big sound at the theater, check it out. Otherwise, you could probably wait and get it on Netflix.

Image taken from Wikipedia.
Posted by Unknown at 5:52 PM