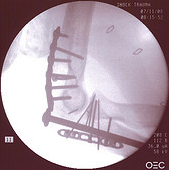 On Saturday, February 21, 2009, Holly rode her horse for a little while and then was on the ground walking him to the gate. At the gate, she was ready to let the horse go when something distracted him. He stepped on Holly's foot and without realizing it, he knocked into her. That essentially tripped her and she fell right on her elbow.

She called me (this is the second time I've gotten such a call -- shoulder) and told me she fell. She wasn't very specific but sounded out of it. I could tell from her tone that she new it wasn't as bad as when she broke her shoulder. So, I hopped in the car and raced to pick her up. Then, I raced to the hospital. On the way, she told me what happened and that she knew she broke her elbow. The hospital was actually kind of a pleasant experience. We were there for ~1 hour. Pretty good for an ER visit for a non-life-threatening visit.

Turns out Holly knew. She heard the crunch of the bone. The ER doc said that she broke it in several places and recommended we visit the orthopedist that Holly and I already saw for other things. So we did.

But, our doc said it was worse than just a break. She probably had dislocated the radius bone (in the forearm) and there might be ligament damage. This was out of their league and he called a specialist at Shock Trauma in Baltimore. There's a doctor there: Eglseder who is the best "elbow guy" in our area. Boy have we heard that about the guy from everyone we met again and again. "If I hurt my arm, he's the only..."

So, Dr. E. took us on right away. We were scheduled to meet him during his clinic hours on Thursday, February 26, 2009, and he'd operate in the afternoon. Turns out, Dr. E. noticed something in the X-Ray that everyone else had missed: her radius bone was dislocated NOW. It had not "been" dislocated... it WAS dislocated. She must have been in absolutely unbelievable pain. But, she handled it so well. On a scale of 1-10 in the ER, she said 8.5. On the same scale this morning, she said 4.5. The drugs helped. And she's a damn trooper.

So, the main objective of the surgery was to fix the bone in the elbow that keeps the radius bone from dislocating. If unsuccessful, she'd never have stability in her elbow. Also, there are two nerves in that area that they were worried about working near. They were worried that the surgery might aggravate them to the point that she might lose the use of her hand. But, only a 3% chance of that. And, her hand is fine. No nerve damage.

They called me 30 minutes into the surgery and said they had to do a bone graft. That means using a cadaver's sterilized bone in place of her own. Apparently some religious people have problems with that sort of thing. We don't (see my knee). So, I said OK. Then the nurse told me Holly was doing great and they were making progress. I almost lost it (crying of happiness). I was so worried for her.

They told us the surgery would take about 3 hours. We figured it would take longer because of the bone graft. They called me at about 2:15, so they started a little before 2. The "rock star" surgeon himself came down at about 6 to tell us the surgery was a success. He said that at this moment, she has full range of motion. BUT because of scar tissue from the accident and from the surgery itself, she'd lose some range of motion. He felt uncomfortable saying how much. I'm sure she'll be fine.

After about an hour, I called and asked about seeing Holly. The nurse said she'd come get me in 15-20 minutes. An hour later, I went to get dinner and they immediately came to get me right after I paid. So, we were finally taken up to see Holly. She was doing OK. She was in pain a little (a lot, really) and the recovery room nurse was working with her. Then, they were ready to move her to her room. It was close to 9 at that point and visiting hours were over at 9. They said they'd work something out so I could spend more time with her, but I couldn't stay the night. I went to my car to get our "airplane pillow" for her. Then, I made my way to her room.

Unfortunately, she was in great pain. :( She asked me to find a nurse. I did and they said they'd tell her nurse. We waited and waited. Nothing. So, Holly pressed the call button. They asked what she wanted and then gave no answer when Holly said she wanted pain meds. All the while her roommate was BLASTING her personal TV. Then, she was having a hard time taking the pain and we buzzed the nurses again. It was explained to us that Holly's nurse was attending to another patient and we'd have to wait.

About an hour later, her nurse came back. It was frustrating, but given the way the nurse dealt with and responded to Holly, it was non-intentional and unavoidable. She immediately got pain meds and started feeling better. Then, the nurse gave her a "lunch" and some water. Holly was feeling better, but I had to go. They wouldn't let me stay.

So, that was it. It was hard to leave her. I know she's uncomfortable and it's hard not to be able to help her. So, to compensate, I've been cleaning the house to make her homecoming better. I'm such a sap. I should be sleeping.
Posted by Unknown at 9:00 PM