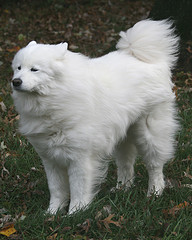 It was December, 1997. Holly and I had been married for just about six months and Holly tells me she wants to get a dog. A samoyed, in fact. I told her I wasn't ready for a dog -- I wasn't ready to give up some of the freedoms I enjoyed not having the responsibility of taking care of a dog (feeding, walking, watching, ...).

Lucky for me, I was vetoed. Holly insisted we get a dog and we went to a breeder to look at the new puppies. That's when we found Cali. Who knew how much happiness that beautiful fluffball would bring to Holly and I and anyone that ever came in contact with her.

A couple weeks ago Cali stopped eating. A lot was going on at our house with Holly traveling and me traveling and it's not too uncommon for Cali to get stressed and not eat as much as normal. But she was hardly eating at all. We started to get concerned and took her to the vet.

The vet ran several tests and took some x-rays, but nothing conclusive showed up. They suggested that we try different foods to see if Cali's tastes had changed. During another visit, the vet and Holly noticed that her four front teeth were loose and we hoped that might be causing her not to eat, so they were pulled. But she still wouldn't eat.

Most of this happened while I was at C2K9, the general OpenBSD hackathon in Edmonton, CA. Then, I came home for our anniversary on June 7 to spend the day with Holly before she took off on the 8th to visit Jeni and her new baby, Logan. While I was gone, Holly said she was extremely stressed out worrying about Cali. When I got home, I got to experience that first hand. Cali looked pitiful. And she had no interest in eating. I would imagine she probably at two full meals in about two weeks.

Finally, on Wednesday, the 10th, Holly's mom took Cali to the vet again. They did an ultrasound of her abdomen which showed a likely tumor on her liver. The vet wanted to open her up and take a look inside to see what was really going on. They wanted to do the surgery on Thursday and Holly was still visiting Jeni. She just grabbed the next flight and I picked her up at BWI. We headed straight for the vet's office. Cali was so excited to see us and very anxious to go home. While the vet thought it was best to keep Cali overnight, she realized that Cali's odds in surgery were really very low. So, she let us take Cali home.

We tried to make Cali's probable last night with us a special one. She seemed eager to eat so we gave her some chocolate chip cookies, Frosty Paws, and other treats. We spent most of the evening petting her and telling her how much we loved her and that she's a good girl. We took pictures of Cali and Sydney together, Cali and Holly, and Cali and I. It was a good night and Cali truly seemed happy. Because of her IV (which was capped), we couldn't let her roughhouse, but she seemed very happy to be at home with us. It was a very emotional night for us and I'm sure for Cali (and Sydney). We knew what we were going to probably deal with the next day, so we just wanted Cali to be as happy as possible.

We had to get up reasonably early on Thursday. Both of us took the day off to be with Cali. We took her to the vet around 8 AM. She was hooked back up to her IV to hopefully build her up for surgery. Along with Holly's mom and dad (and their cat, Thunder), we waited in a private waiting room while the vet prepared for the surgery. Then, the vet came back to get Cali and let us stay in the surgery room until she was under. Then, Holly and I waited. It wasn't very long until the vet came back out.

Cali had two tumors. From an email Holly sent to a friend:

She actually had two tumors, one we finally detected on ultrasound and another that didn't show up until they got in there (neither showed up on several radiographs). The first one was about 7x4 cm and was on one of the lobes of her liver. It was clearly vascularized based on u/s and her clotting profile (one level was high indicating a strong possibility of DIC), but there was a long shot that they could take it ok if it was localized to just one lobe.

The other one was much, much larger, and was adhered to the bottom part of her stomach, duodenum, pancreas, and a different lobe of her liver. Clearly malignant looking and most likely hemangiosarcoma (I haven't biopsied). Either way, the only real option was just to not wake her up. We were able to go in with her to be induced for surgery (benefit of being a former employee :-)), so she had us there basically until the end.

I think we did always suspect the big C, but had a small glimmer of hope since we found nothing at first on radiographs and she had little symptoms other than becoming picky about food.

She was truly one of those very special dogs. We knew it would be hard when she went (she was my mom's favorite- and my mom has her own Sammy!), and this was even harder since she was the first one (and otherwise seemed the healthiest).

The vet came out and said that she could probably take care of the tumor on top that was on one lobe of her liver. But the second tumor would have been too much. And even if she got most of it, it would come back and Cali would be dead within six months. The vet old us that going through with removing the tumors would not be doing Cali any favors. At this point, we think that Cali was just uncomfortable. The tumor was pushing against her stomach which caused her not to eat. Had Cali not stopped eating, we probably never would have known about either tumor and she would have just bled out (dying a painful death). So, we think that Cali passed without suffering and that was the best thing we could have done for her.

The last couple days have been extremely difficult for Holly and me (and Sydney). Little things seem to be hard. When we leave the house, we always give the pets treats and Holly caught herself on our way out to Chipotle Thursday night getting two dog treats. Cali sleeps on the floor on my side of the bed and I went out of my way not to step on Cali when I woke up (of course she wasn't there). Neither Holly or I really want to do anything, but we're trying to take care of the things we're responsible for.

From the day we brought Cali home, she's been such a happy dog. You could just see it in her eyes that she just loved us and loved to be around us. She loved to play (especially with Holly's mom's samoyed, Mandy and then, later, Sydney). Whether she played her favorite "tree game" (her own creation where she would hide behind a tree and then chase Sydney or Mandy when they got close to the tree) or playing with one of her stuffed toys (the "shag" (on the left in the picture to the right) and the hedgehog were her favorites), she loved to play. She was (almost) always eager to eat (like she was worried a litter mate would steal her food) so it was more worrying when she refused to eat.

At first when we found Sydney, Cali was annoyed that she wasn't the primary focus of our doggie attention. And Sydney was very eager to be her best friend. Many times as a puppy, Sydney would try to lay next to Cali, but Cali would get up and move five feet away from her. That didn't last long. It was a common sight to see Cali and Sydney laying butt to butt or back to back. They were good about sharing their toys (Sydney always wanted whatever Cali had). After getting used to Sydney and after Sydney grew out of being a crazy puppy, Cali and Sydney became best friends. They loved sitting next to each other on the floor playing with toys or sitting together on the couch while Holly and I were watching TV. Or, one dog would sit next to Holly on the couch while the other would sit next to me on the love seat while I worked on my computer. They also loved to wrestle with each other growling and barking at each other and generally making a mess in our bedroom.

Cali loved to talk to us. When we would come home from work, Cali would greet us with "woo-woo-woo-woo" (see the picture to the left). She also was very protective of us. Especially Holly. If I wasn't in the house at night because I was out late or because I was away, Cali would be "on duty". She would usually put herself halfway between Holly and the front door. And she growled at people that even thought about walking near our house. And when Holly or I were injured (happens a lot at our house), she would stand at the bathroom door ready to bark if we fell in the shower. Along those lines, one of my proudest moments in life was when I was ready to protect her. We were out for a walk one night, just her and I, when a rottweiler without a lease ran away from its owner towards us growling and barking like it was in kill mode. Without thinking, I choked up on Cali's leash and put myself between Cali and the approaching dog while yelling at the owner to get control of their @#$%ing dog. Luckily, the dog responded to its owner before getting to us, but it was a scary situation.