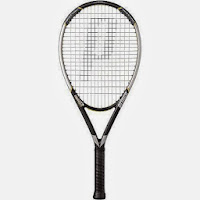 I've been playing tennis since I was a kid.  My parents always played, so of course my brother and I got into it pretty young.  When I was young (teens and before), I was pretty good.  Not great, but pretty good.  I played with some really good players... some that went on to become college coaches or club pros.  But, in my teens, I got a job and really cut back on tennis.  As an adult, I tried to get back into a few times, but it never lasted.  It seemed that my interest piqued at the end of the Summer and by the time Spring came around, my interest was gone.

This year, I started playing early.  I was hitting against the wall in February and played with my dad some then.  I continued hitting against the wall and started playing other people around April.  By the time June came around, I was actively playing several people a week and consistently getting better.  I played in a tournament at the end of August and made it to the finals.  This Fall I've been playing in a USTA Flex league.  And over the weekend, I entered another tournament.

The Flex league has been fun.  I've been playing at a 3.0 level, though I feel like I should probably start looking at 3.5.  I'm beating most of the 3.0 players pretty handily.  But it's fun and I met a pretty decent player that I get along with.  We've gotten together and played since and play to play more in the future... so the Flex league was worth it (since I met at least one person I want to keep playing with).

On Friday night I had a Flex league match.  And I played really well.  The guy admitted before we started that he's rated at 2.5 and was worried he wouldn't be much competition.  Well... it turned out to be justified.  I took it pretty easy on the guy, hitting it right to him and giving him chances to win points, but he didn't win all that many.  And, I was playing great.  I didn't make any mistakes and couldn't do anything wrong.  My serves were all going in (I had only one double fault in the match), but I *was* serving pretty easy to him.  The match took about 30 minutes and I walked away 6-0, 6-0.  I was feeling pretty good.

On Saturday morning, I played my first round tournament match.  I was pretty confident and thought I was playing in a 3.0 rated tournament.  Turns out, I mis-read the listing and it was a 30 years old and older tournament.  The guy I played was a 4.0 player.  And, I'm not quite sure what happened, but I was off.  I couldn't do anything right.  The stuff that was working the night before just wasn't working for me on Saturday.  I was trying to serve harder, but even when that wasn't working, I went back to how I served the night before (what was working so well) and even that wasn't working.  I went from double faulting once in a match to doing it about twice per game.  I won the first game, but didn't win another.

I felt pretty bad about the whole thing and was kind of embarrassed at my showing.  I had a couple of glimpses of "greatness", but that only accounted for a point or two in the match.  I started to doubt my skill and was considering emailing the tournament organizer to ask how a 4.0 player (and the 5.0 player that beat him) were in my 3.0 tournament bracket.  But, then I noticed the lack of decimal in the "M30s" description (Men's 30 Singles), vs. the "NM3.0s" description.  And I realized that I wasn't playing 3.0 players, but I was playing people over 30.  So, I felt a little better.

On Tuesday, I played the guy I mentioned above whom I met through the Flex league.  He's gotten a lot better since I played him in our league match.  And when we started our match, I felt like I did on Saturday: I couldn't do anything right.  My serves were going in, but everything else wasn't.  He was playing very well, though, and I was concerned that I wouldn't win a game.  It was my turn to serve and I was down 0-3.  I tried to relax and find my game.  And I won that one.  I ended up winning six in a row to win the set.  But it was a terrible feeling to be back to where I was on Saturday.  And, when I started serving in the second set, the same thing happened.  Nothing was working (except my serve) again.  And I lost that game.  I worried about the set, but halfway through the second game, I picked it up again and won out.

I'm having a lot of fun playing this year.  I see where my maturity as a 39 year old helps me overcome some of the frustrations I had that would get me when I was a teenager.  I'm more fit than I've ever been in my life and feel like I can count on my body to be there for me when playing.  I just signed up for another tournament in December.  This will be a 3.5 (yes, I checked) tournament for me.  I hope I do well!
Posted by Unknown at 10:45 AM